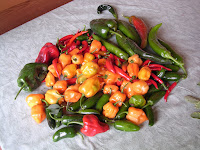 As you know, we grow some hot peppers. The thai peppers just started to ripen and the habeneros are now ripening as well. Dave and I are getting ready to make some more tobasco sauce because, you know, 1 1/2 gallons just isn't enough. It will keep for a long time - our last batch kept in a glass jar in the refrigerator for 3 years and seemed to get better as time went by. We've been talking about Scoville ratings so I thought I would pass on this post from a website I found. Our habeneros are Scotch Bonnet - be careful with them & enjoy!

There are two ways of classifying chile peppers—by their heat and shape. In 1912, pharmacist Wilbur Scoville invented a test to measure the hotness of peppers by diluting the pepper until the heat was just perceptible on the tongue. The Scoville rating is measured in multiples of 100; he rated a bell pepper 0, while a Japanese chile came in at 20,000 on the Scoville scale.

Will be delivering a salsa from "Captain Ron" on the Salsa Diablo that exceeds the Scoville rating.!!!