Make hay while the sun shines! 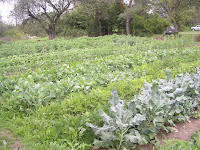 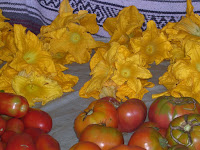 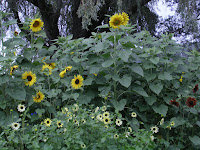 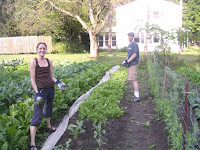 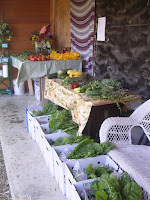 Well, we are in peak harvest and, thankfully, the boxes are full of a variety of produce. Last week we had onions, garlic, potatoes, chard, carrots, peppers, okra, eggplant, melons, turnips, beets, beans, tomatoes, summer squash, herbs and flowers. I'm probably forgetting something - needless to say, it's a lot of fun this time of year!

The good thing about a polyculture farm is the variety. As we talked about at the onset, sometimes certain crops just fail. In farming, I am reminded daily to make hay while the sun shines! As all know, we had broccoli and a little cauliflower for a short time before Black Rot set in and we had to pull the plants in June. (luckily we have the West Garden for the fall crops) Then we had 3 or 4 great weeks of cukes before Downy Mildew set in and halted production. Now it appears that we are up against Late Blight for the tomatoes. I pulled about 12 - 15 plants (of the 100 +) today in the west garden which I suspect have Late Blight. I'll probably pull more tomorrow. So far, we've only seen Septoria Leaf Spot on a few of the romas. I have done quite a bit of research on this disease and, from onset of the disease, a plant can die within 6 days so it's imperative that you move quickly. From what I've read, it's widespread on the west side of Michigan but I haven't yet found out the progression throughout the rest of the state. Of course, heat and sun can slow the progression but we haven't had much of that lately. So, lesson of the day? If you want to put up some tomatoes, get them while you can. You never know if they'll be here tomorrow.

p.s. - I pick tomatoes and offer them in varying stages of ripeness. This way, they'll keep longer and hopefully will crack less. So, if you see them on the table with a little green on part of the tomato, or even 1/2 green, take a few. They'll ripen throughout the week and you'll have an ongoing supply of ripe, tasty tomatoes.

Other notes: The beans are about done - we might get a few more - but peas are now starting so we should have sugar snap peas in a few weeks. The summer squash is nearing its end as well but the winter squash and pumpkins are starting. We'll be harvesting the Adirondack Blue potatoes this week. The beets and summer turnips are in their glory along with the chard, collards and kale. The eggplant is slowing but the carrots are cruising. So, in a nutshell, we're again turning the corner on the seasons.

Hope you're enjoying peak harvest!
Posted by Unknown at 10:00 PM