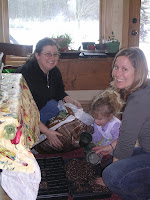 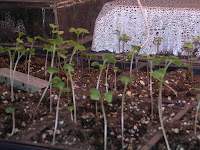 Hi there - here's to the enthusiasm of new members! Robin & Steve and Erin & Ben came over last Saturday for a tour and to lend a hand. Robin, Erin, Hannah & I planted 7 flats of tomatoes, peppers, and broccoli. The guys worked on trying to ream out the posts for the hoop house. After 3 hours of: trying to pound out the clay with a sledge; going home for a power washer and attempting to hook it up with frozen hoses; trying to ream them out with a paddle drill; they finally stopped, after clearing 2 of approx. 50 pipes. The next day: Dave borrowed Mike's (Stadium Hardware) hammer drill and dropped it; tried to fix it, took it back; rented a small jack hammer from A-1; the two of us jack hammered away for about 2 more hours and cleared maybe 3 more pipes. Finally, Dave went to Bob's who pulled out the right tool and Dave cleaned out the rest in about 2 hours. So, that job done, we were ready to erect the hoop house. 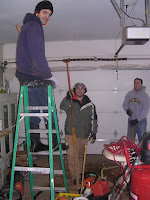 Now everyone who has been around for awhile knows how excited I've been to get to this job. We thought it might happen in October or November but Thanksgiving was around the corner and most of you also know that around that time, I do every job to the house that has been delayed throughout the year - paint, mud walls, hang ceiling fixtures - whatever. So, the hoop house was on delay. Then the freeze came. Then I came up with a machine that would supposedly do the trick even if the ground was frozen. No time. So, with winter break upon us, we set the goal of erecting the house. With two new members volunteering to come out, I thought it would be helpful if Dave could get some help with those pipes. It started the ball rolling on Saturday. Finally, on Friday we went out to set our corner posts. 4 corners in. 2 so damaged from using the make-shift pipe insert which was supposed to "protect" the pipe that they will probably need to be cut in order to accept the hoops. So, we had to call the factory. It's been a long time since I've called a factory where the first person I speak with can actually answer a question - even longer still that the person can walk over to the "Manager of Installation" - who's on a machine in the plant and has to come down to talk - to confirm that what she's telling me is correct. Jaderloon, folks - if you need a greenhouse, give them a call. They took about an hour out of their day to ship us 2 $10 parts. So, end of story, they sent us the proper post driver and we have now erected 13 hoops and only have about 9 more to go. Woo hoo! There's a lot more to go before we can get the plastic up and secured but hopefully it will be done in 2 -3 weeks, in time to move the seedlings out and get things moving. 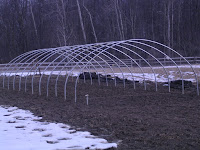 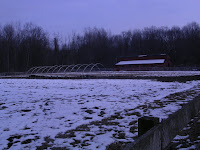 So, for anyone who has thought about coming out to help, please give a shout. I'll figure out a job to do and it will be one that needs to be done and you will help move things along. Thanks again Robin, Erin, Steve & Ben.
Posted by Unknown at 7:08 PM 2 comments: 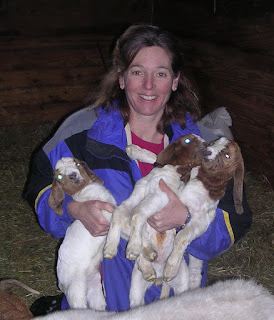 Sandy had 3 kids today! Nathan, Grandpa Gerry, and I helped in the delivery. All are standing, nursing and seem well. Now we're just waiting for Dixie to deliver.
Posted by Unknown at 5:53 PM 1 comment: 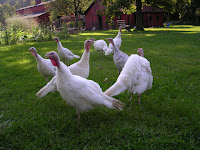 When I first started researching the cost of heritage breed turkeys, I was surprised to see them for sale at $7.50 - $10/pound. How can that be when you can go to the market and buy them for $0.39/lb before Thanksgiving? Are they crazy? Now, after raising them and actually accounting for the costs, I understand. We raised Naragansett turkeys 3 and 4 years ago. Before that we raised Broad Breasted Bronze. We had one tom B.B.B. which dressed out at 38 lbs! He was fully mature (about 2). The 6 - 8 month birds were between 18 & 25 lbs. The Naragansetts (heritage breed) dressed out between 14 & 22 lbs. at around 7 or so months. Not bad. This past year we purchased 7 Blue Slate and 10 White Hollands, also both heritage breeds. Now, most people know that I'm all for raising animals that are sustainable. I like the goats because they are healthy, require less land to graze, make it to market relatively quickly, etc. It is said that the heritage breed turkeys can forage nicely, can reproduce naturally, and aren't as inbred as some of the "commercial" breeds, thus may have fewer health problems. I don't know what happened, but of the 7 Blue Slates, only 1 made it to market. Of the 10 White Hollands, 7 made it. The Blue Slates were weak from the start, lost eyesight, and were not very adventurous. So, we won't order them again. The White Hollands did well. But, in the end, they dressed out at a max of 15 lbs for the toms and 8 for the hens. It costs approx. $10/chick. Processing is $7.50/bird. So, as you can see, it's impossible to sell a bird for about $2/lb. when they are so small. If you add in solely the cost of feed, it cost us $5.89 to raise 8 turkeys this year. I sold them for $4.50/lb because I had told people that would be the approx. cost (which it would have been if they had reached a higher weight). So, we had 2 turkeys for Thanksgiving. If I subtract out the gross proceeds from the costs, the result is that our 2 turkeys cost us $226 or $7.63/pound. Of course, the labor and overhead are not factored into any of this. So, I now understand why some people are charging $7.50 - $10 per pound for turkey. I will say that the taste of White Holland is the best we've had - they were tender, juicy and excellent. Those of you who bought the birds this year might want to comment (there were only 3 people) individually but I heard comments that concurred that these were the best tasting turkeys ever. All of this said, I realize that not all people can afford meat at $6/pound. So we'll raise some of the giants. Their feed conversion ratio is higher than the heritage breeds - they're too heavy to fly so they don't expend as much energy as others. Since they grow larger, we can charge less per pound. We realize that we can't offer birds at $0.39/lb. but we hope to be able to offer healthy meat at a price point that is affordable, thus sustainable.

What's up for 2010?
If you'd like to reserve a turkey for this fall, please let me know - tell me if you want a heritage breed, the approx. size bird you'd like, send a $10 deposit per bird, and I'll write you down. The deposit is refundable if we don't get a bird to you. They will arrive the week of March 22 and will be processed before Thanksgiving (hopefully 3 - 5 days before).
Posted by Unknown at 9:27 AM 2 comments:

We're preparing to process our first goat for meat. Despite our efforts not to name our goat kids, they all have names. A family from Midland bought Brown Foot about a month ago. By now, hopefully he has gotten to know their milking goats and is expecting some kids of his own in 4 1/2 or so months. Dixie's first kid, which Allie has named Lars, is now in training to walk on a lead and, hopefully, be a nice buck (is there such a thing?). We'll keep him for future breeding purposes and to someday show. White Ear is headed for the processor within the next week or so. I bought some goat meat from Monaghan's (Kerry Town meat market) a couple of weeks ago. I bought a partial slab of ribs and a shoulder roast. I didn't par boil the ribs - just barbecued them. They were a bit tough for us. But the shoulder roast was excellent - tender and not gamey as we were a bit afraid of. We slow roasted the roast in the convection oven. So, now that the taste test is over, we will process White Ear and fill up the remaining space in our freezer. I know some people ask how we can eat the animals that we raise. My response is that I have a hard time eating animals that are raised by someone that I don't know or can't visit. Here we know what they're eating, what they're breathing, what they've taken if they are sick, if they were ever sick, etc. We know what we're eating. We appreciate that the animals help complete the growing circle here on our farm.

The following is an excerpt from article by Jean-Marie Lughinbuhl, “Meat Goat Production in North Carolina”, 1997, Last modified February 28, 2000. It was published through the North Carolina State Cooperative Extension.

In addition to the health benefits of goat meat, goats require less land to raise than beef as they are excellent foragers. If they had their way, they'd eat up to 60% of their diet in scrub brush. Depending upon the quality of the pasture, 10 - 14 goats can be maintained per acre and goats are processed between 6 and 12 months of age. It takes about 2 acres of pasture per grass-fed cow and up to 2 years, depending on the breed and whether the feed is supplemented with corn.
Posted by Unknown at 8:47 AM No comments: