On Sunday Judy Durfy brought over another hive and stocked both hives with bees. If I haven't told you, Judy and Randy Durfy are beekeepers and maintain about 10 or so hives which are placed on organic farms throughout the area. Last year they located a hive here and stocked it with Russian honey beess which are a bit smaller than their Italian cousins. Judy and Randy have a theory that, because the Russians are a bit smaller and build a smaller comb, they may be able to keep the thrips out which may increase longevity for the hive. We didn't get a chance to find out if they wintered over because apparently they did so well that they ran out of room and swarmed in mid-October. 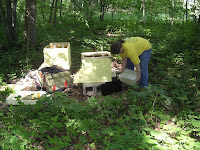 The workers will start to make honey immediately but until they do, Judy fills some boxes in the hive with sugar water so they have something to eat.

This year Judy was planning to stock the two hives with another variety of bee. But, when one of her neighbors called to report that there were two swarms in her dwarf lilac at the base of her driveway, she changed her plan and sprung to action. She smoked the swarms and captured them in two boxes and brought them here the next day. She reports that there's a 50/50 chance that a captured swarm will swarm again but hopefully they'll stick around and our hives will be full and she'll be able to harvest a little honey. Another factor that impacts honey harvest is that when a new hive is set, they have to leave a certain amount of honey in the hive for the bees to feed on over the winter so many times they don't get a big harvest the first year. We'll see. 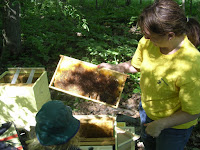 Hannah looks on as Judy shows us the combs that the bees made last year. When that hive left they took all of the honey with them. So Judy left the combs for the new hive - a little less work that they have to do. If the combs were not here, the blanks would be there and the bees would get to work.


We have a lot of bees in the area. If you get a chance to walk under one of the locust trees in the driveway, listen over-head. It almost sounds like a swarm - there are so many different types of bees working the trees now. Judy and Randy love our location as there are many locust trees, bass wood trees, and other pollen sources for tasty, clear honey. It's interesting to hear them refer to different types of honey - like buckwheat or locust or dandelion - and the value associated with each.
Posted by Unknown at 8:41 AM