The Story of our Newest Hoop 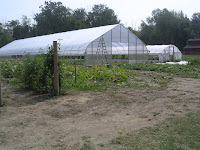 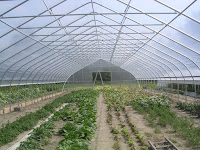 Saturday, August 28 was quite a day here on the farm. It was the culmination of a lot of work put into figuring out how to erect a new hoop house, funded in a way that would make sense for our operation. Back in February I learned about the USDA grant program which is administered through the Natural Resources Conservation Service. I first heard about it through the forum on Local Harvest. Everyone was chatting about whether they had been approved or whether they thought they'd be approved and what they could even apply for. Farmers from different states were reporting wide variations about the interpretation of program rules . I went to the NRCS site that evening and found out that the deadline for application was in 1 1/2 days. Time to move. The next morning I called the local office which is close to Baker, off of Jackson Road. I went into the office to pick up an application and ended up with the opportunity to apply. We chatted about the rules and, at the time, they thought that the hoop had to be erected in a place that had been planted the year before. I wanted to erect it in the east field, which is in the first year of crop production but had previously been in hay. So we went on our way - apply again next year was the result.

In mid to late March, I started hearing about the applications that had been approved. Many were for hoops placed on virgin ground. Finally, in mid-April, I called back. It seems that the rules had been clarified after I had applied and a person can site their hoop wherever they want. Luckily, they encouraged me to complete an application because there were rumors that not all of the Federal dollars had been allocated. So I applied. It was a long process. If you've ever gone through the SBA (Small Business Administration) loan process, you know what I'm talking about; the rules and regs can be difficult to navigate, even for the lender. Finally, in late-June, everything came together and I heard from Steve Olds that the application had been approved and that the powers that be had been able to fund it as well. Woo Hoo!

In the mean time, back in March, I met Jeff McCabe and Lisa Gottlieb through the Local Food Summit in Ann Arbor. I learned of their loan program and considered applying for the spring build but I was concerned about taking on debt at that time. We had a small hoop and I didn't have all of our CSA memberships sold and the labor expense was starting to kick in along with equipment expenditures, etc. I didn't think it would be a good idea to add debt payments to the mix. So, I thought I'd apply for the fall build. As things go, I was fortunate to meet a lot of the young farmers via the Local Food Summit. Washtenaw Community College also hosted a farm job fair and Victoria Bennett invited me to speak, along with others, about farming. I met more farmers and community members there and was very fortunate to make the connection with our current only part time employee, Sheryl. And the ball was rolling. The sun came out, the snow melted, people came to tour the farm, people signed up, and, finally, after months and months of planning and planting and tending, distributions started at the beginning of June. Big sigh of relief - we had enough food to fill everyone's boxes and more.

But back to the hoop. Jeff & Lisa grow food not far from our house. So every once in awhile I'll stop over to see how things are going and vice versa. I like to make the rounds to other farms when I can. One day Jeff reminded me that the application for fall hoops was approaching. I hadn't known about it - somehow I forgot to add myself to his e-mail list. So, I applied for funding for the difference between the grant and the cost of the hoop and in late July learned that the request had been approved. I also applied for assistance with building the hoop and that was approved. Soon Jeff was calling me to schedule the build. Wow. This was really happening. We scheduled it for August 28. I scrambled around to finish up the final documents with the NRCS, building dept, etc. Dave, Sheryl and I worked to get this place ready for the build and the after-party. And the day came.

August 28 started as a cool day. There wasn't a cloud in the sky. The wind was just enough during the day to help keep us cool and died down in time to pull plastic. The volunteers turned out. And we built. And we cooked. And we ate. And, as the moon rose, we played.

Lisa wrote a beautiful photo essay that you can check out here.


Thank you so much to everyone. A special thanks to Dave and Julie Montiero De Castro (my sister) and Nancy Leist for preparing so much food and working so hard to help prepare for the party. Of course, our deepest gratitude goes to Jeff McCabe and LisaGottlieb who made a loan to help fund the structure and brought out the volunteers to build it and coordinated the after party and the bands to celebrate it along with their efforts. Thanks to Hullabaloo and Prophetic Synesthetic Kinetic Collective for providing fun and beautiful music. Thanks to Dan Vernia and Rob Kangas for roasting the pig. And of course, thanks to all of our members. Without you there would be no need for a hoop.

I'm still debating on what to do with the greens that we grow this winter. If you're interested in a winter CSA, please let me know. The cost would be roughly $20/week and would include lots of greens and root veggies. I'll probably run it from early November through April with a 4 week break from mid-December until mid-January. It's in the planning stages. I'm also considering taking the produce to market this winter which might be a nice way to connect with the larger community.
Posted by Unknown at 8:26 AM

Very cool Jennifer! So glad I read that. Now I know what the heck you were talking about. I had no idea what the heck a "hoop" was, but was pretty sure you weren't talking about a basketball hoop! Sounds like things are going well. So happy for you!