While I haven't posted in awhile, there's quite a bit happening around the farm.

Here's the hoophouse update:
Here's the field update:
Other info:
FYI - I sent the following section out to members that have already signed up but thought others might also be interested in what might make our operation run more efficiently.  Every once in a while someone asks  this question.

We're continuing to make new investments here in the hopes of making each year better than the one before.  One example of this is that last November we had about 100 or more tons of limestone hauled in to raise the drive and help with the mud issues.  Maybe it won't rain this year as much as it did last but if it does, pickup should be a bit easier.  We still have a wish list that we're working on to improve the farm:

To help fund one of these items, we might plan a fundraiser.  If anyone has any thoughts or ideas on this, please let me know.
We're looking forward to seeing everyone soon!
Posted by Unknown at 8:23 AM 1 comment:


Good news and bad news.  First the bad: Somehow I blew out the links to the other 2 blogs that I maintain which are "What's in the Box" and the "Recipe" blog.  So, here are the links, in case you need them before we can fix my error.

What's In the Box

Good news is that I have posted some job descriptions for positions that we'd like to fill soon.  Looking for a few good men or women (or combo) to help plant, weed, harvest, clean and deliver all of the tons of veggies that we grow here.  If you know anyone that's interested, please have them contact me.

Every week I give people advice about how to pep up greens.  You know the ones.  Maybe they sat in the car a bit too long before you were able to complete your daily tasks.  Or maybe they sat in the fridge, exposed to the cold air for too long.  Or maybe you picked them up from your CSA and they were already wilting.  Who knows.  You have two options.  Get rid of them in some way (compost, garbage, feed them to the animals) or eat them.  Unless I have way way way too much of something, we generally eat them.  And they're really good too.  So here's a pictoral of what happened last week.

At this time of year, the plants grow really slowly.  We generally eat whatever I don't sell at the market.  So the veggies have been picked, sat out at market for at least 5 hours, come home and might not get unloaded right away, and then we store them.  As I'm sure you can imagine, they're sometimes a bit wilted.  Furthermore, I might then store them for a week or more before use.  Here's an example of 2 bunches of chard and a bunch of collards that were about a week (or more) into storage:


They were pretty wilted but were otherwise fine.  As long as they're not slimy or something, they're fine.  So I chopped them up and tossed them in the spinner.  Here they are prior to soaking: 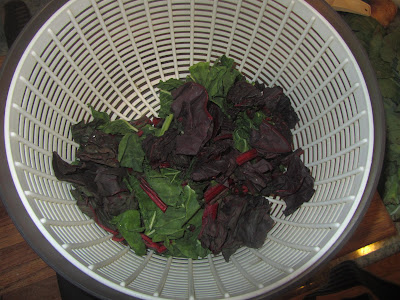 Then I soaked them in cold water for about 20 minutes or so.  Here's how they looked after that: 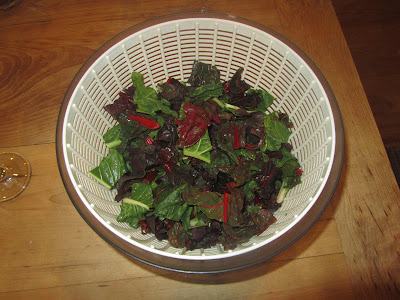 I then tossed them into a pan along with some onions and turnips.  These are white egg turnips which were only about golf-ball sized when I picked them.  They'll get a little bigger but not as big as the American Purple Top.  They're very sweet and tender enough that I don't peel them at all - just scrub them up a little, chop them up and toss them in the pan. 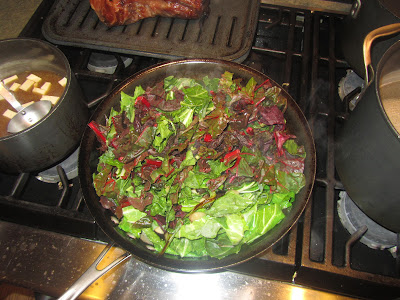 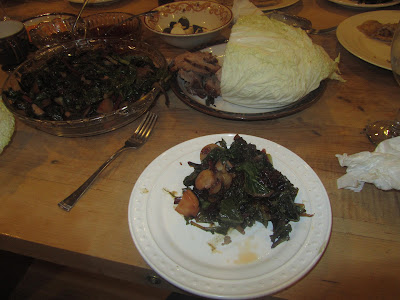 This was a nice, tasty dish.

So the next time you consider tossing out your wilted greens, think again.  This works for lettuce, spinach, choi, collards, kale, chard, etc.