Each season has its “big” projects. Our latest goals have been getting the potatoes and the squash out of the fields. If it’s not done on time, you run the risk of the veggies rotting from too much rain. The sooner they are in the barn, dry, the sooner we can breathe a sigh of relief.

We tackled the squash first. Jen’s family came to help, and we backed the trailer up into the squash patch. Jen and I waded into the scratchy plants and clipped the squash stems. Then we tossed them, football style, to the kids on the trailer who caught and stacked them until the whole trailer was full. Butternut, carnival, delicata, acorn, pumpkins, spaghetti, hubbard… all sailed through the air except the biggest ones. When a few too many were dropped, we switched to walking them to the trailer, even though this method is far less fun.

Before we pulled the trailer to the barn, we realized that the amount of free space did not correspond to the amount of squash we had pulled from the field. That afternoon was spent cleaning out the garage, and we spread the squash onto tables we had set up inside. It’s important not to pile it up so the skin can cure and to avoid rot.

Next on the list were potatoes. For some reason they thrived this year and the field is full of them. This job is harder than the squash job. One person must dig under each potato plant with a shovel, while the other pulls the potatoes free from the dirt and spreads them onto the ground. Then we go back and put them into aerated crates, finally lugging the crate back to the trailer. The job is made harder because the plants on the surface have died back, leaving only a skinny brown stem where a full leafy plant used to be. Combine this with the hay we tucked around the plants for hilling, and you get a virtual treasure hunt. I was happy with the amount of potatoes we have this year, although a lot of them have green spots from where the sun touched them as they lay near the soil surface. 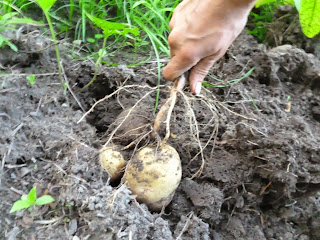 Again we had the problem of storage. The potatoes must last us through the winter, so we have to be careful how we keep them. They need to be cool (but not frozen), dry, and completely in the dark so they don’t turn green. Jen decided to buy more crates, so she went to a company that sells flower bulbs to get their leftover bins. As she pulled in after the pickup, I got my first glimpse of the monstrous pile of crates, stacked precariously on the trailer swaying to a height of about thirty feet. They had wrapped the crates together with plastic and tied them down with twine, but I was still amazed they had made the trip without spilling. At least we now had enough crates to store everything.

We are still digging potatoes and trying to get the winter crops planted. This means focus has moved to the hoops, which will produce most of our food for the cold season, supplemented with the crops we have in storage (garlic, potatoes, squash, and onions). I look forward to our next “big” project, which is planting garlic.

Submitted by Stephanie Willette, assistant farm manager
Posted by Unknown at 11:00 AM